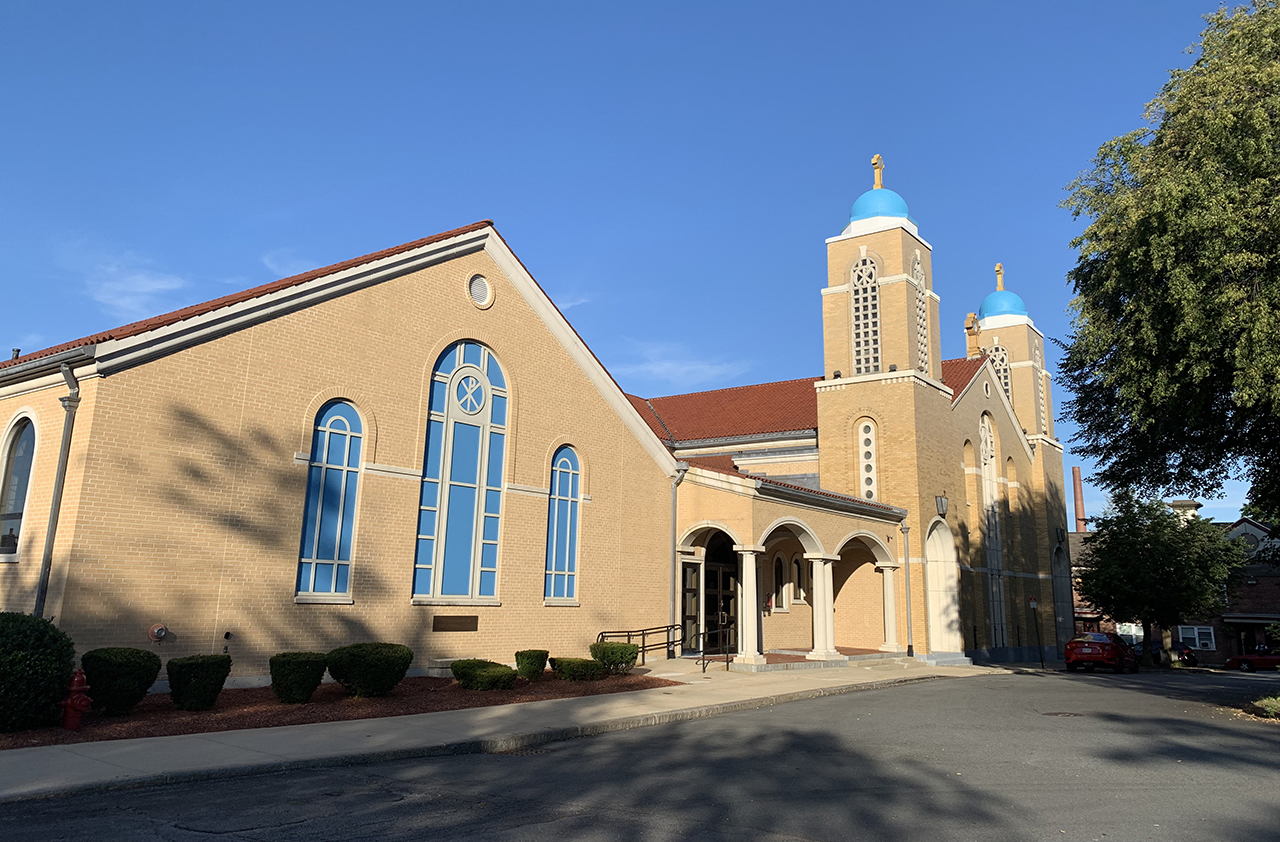 The Transfiguration of Our Savior Greek Orthodox Church was founded in 1924. Without a physical building to call their own, early parishioners first worshipped together at St. Anne’s Episcopal Church on Merrimack Street in Downtown Lowell and later in a second floor hall of a large building on the corner of John and Paige Streets.

In 1925, under the leadership of Transfiguration’s first resident pastor, Father Panos Constantinides, the current site of the church was purchased. A temporary church was erected, and services took place in the basement for many years under the spiritual leadership of Father Demetrios Frangos, Father Christos Pappas and Father Polyefktos Phinfinis.

In 1951, Father John Papadopoulos was installed as the church’s permanent pastor. In 1952, steps were taken to construct the church that we worship in today. Through the generosity of 200 families, all but the interior was completed by 1956.

Father John Sarantos came to our community in the fall of 1956. He celebrated his first Divine Liturgy at the Transfiguration on November 5, 1956, and he led the Transfiguration family for thirty-seven years. During those years, the parish grew substantially, and the church interior was transformed.

From 1959 through 1963, the interior of the church was furnished with pews, a bishop’s throne, and a chanter’s chair. Stained glass windows were installed throughout the church, and the iconostasis was constructed. The eastern wall of the sanctuary was adorned with the first mosaic icon. On October 18, 1964, the church was consecrated by Archbishop Iakovos.

Over the next twenty years, additional mosaic icons were installed throughout the church. In December 1986, a decision was made to cover the remaining walls and vaults of the church with mosaic icons. With the direction of Father Sarantos, the artistry of iconographer Robert J. Andrews, and the generosity, resourcefulness, and determination of the faithful, this project was completed in 1992. On August 11, 1994, His Grace Bishop Methodios of Boston presided over a ceremony for the dedication and blessing of the mosaic iconography.

The retirement of Father Sarantos in 1993 brought Father Peter Gregory to the Transfiguration. He was installed by His Grace Bishop Methodios at the Vespers of the Holy Transfiguration on August 5, 1993.

At turn of the century, the Transfiguration faithful voted to undertake a building expansion project. The Groundbreaking Ceremony for the Transfiguration Family Life Center took place on June 17, 2001, with Father Gregory and Father Nicholas Triantafilou, President of Hellenic College Holy Cross Greek Orthodox School of Theology, blessing the site. Along with a chapel, the new structure would come to house offices, meeting rooms for the church's many ministries, and Sunday School classrooms. It also allowed the Transfiguration Church to become handicap accessible.

Under the guidance of Father Christopher Foustoukos, installed by His Eminence Metropolitan Methodios on October 2, 2002, the building expansion project was completed. On September 28, 2003, His Eminence presided over the dedication of the Transfiguration Family Life Center. Three years later, he would return to preside over the consecration of the St. Sophia and her Three Daughters, Faith, Hope & Love Chapel on September 8 and 9, 2006.

The following winter, The Transfiguration Church welcomed Father Demetrios Costarakis to our parish. He was installed as pastor by His Eminence Metropolitan Methodios on January 4, 2007, and served through December 2008.

On August 5, 2012, His Eminience Metropolitan Methodios installed our current priest, the Rev. Fr. Thomas Chininis, during the Vespers of the Holy Transfiguration. Fr. Tom and his family were warmly welcomed to the Transfiguration community at a reception following the service.

Please enter a search term to begin your search.